Nothing new under the Sun. «The Kleptomaniac» is an American old film. It was made by Edwin S. Porter one of the most famous filmmakers from the early days of cinema, especially outside France. This movie is about justice, and how fair it is. The plot if quite simple. A well-dressed woman leaves the house and gets into a carriage to go to the department store. While she is in the store, she steals several items and is caught by the store’s employees. Meanwhile, a poor woman with two young children steals a loaf of bread out of desperation, and is quickly caught and arrested. Both women are taken to the police station and then to the court to find out what punishment each of them faces. So the rich woman is freed because she can pay for stolen items, but the poor mother who steals a loaf of bread from a shopkeeper to feed her starving children in their miserable novel, gets a different sort of justice. 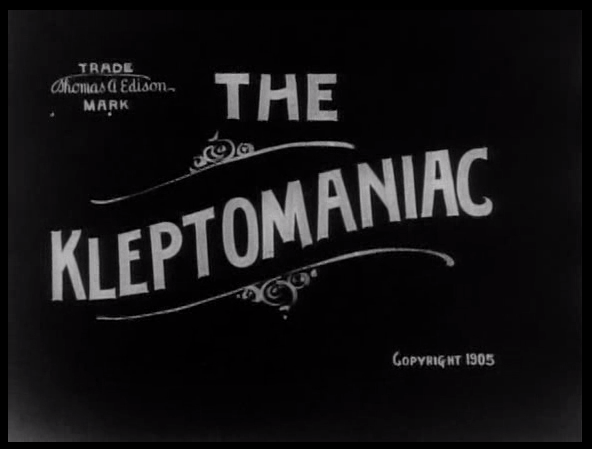 This film presents something we never ever thought about. Those with money get better treatment than those without. The rich lady in the cushy store steals some expensive items. When grabbed she manages to get special treatment. A poor woman steals some food for her starving daughter and is treated severely. “The Kleptomaniac” makes its message through contrasting parallel stories (told back to back without crosscutting). First, a high-society lady steals a garment, for which she receives leniency. Second, a poor mother steals bread, for which she is imprisoned. A final tableau shows blind justice holding a tipped scale with a bag of gold on one side and a loaf of bread on the other.

The film consists of 11 shots, in addition to title cards, told in the tableau style. Some of the title cards seem unnecessary-making mention of the obvious; whereas, busy, seemingly irrelevant actions in the store and courtroom are left without description within the film proper. Yet, back then, exhibitors would provide lecturers to describe such scenes and the film overall to audiences, and those lecturers could use the Edison Company catalogue descriptions as a template. Thus, as with most early films, this narrative wasn’t intended to be entirely self-contained.

I can say that this film is an experiment in realism. The scene of the crime unfolds amid a flurry of bodies, with no cinematic devices to point out the Kleptomaniac herself—a successful simulation of pickpocketing, precisely because it’s so tough to pick out. It’s 1905 but that’s already too much realism.

In fact, the message is quite an ambitious one for 1905, and it’s a shame that its delivery is just a shade confusing at times. While the scene inside Macy’s in which the wealthy lady commits her crime seems to go on forever, there are so many people busily milling around that we’re never sure where we’re supposed to be looking, and so it’s never clear exactly what is going on. In fact, it would be quite easy for the audience to miss the lady’s crime altogether. This same confusion also obscures the courtroom scenes. Film technique was still in its infancy — it would take the arrival and ascent of D W Griffith before film language began to flourish — and although Porter made use of some panning shots, most of the story is told in tableau form, which means it lacks detail and depth. Nevertheless, The Kleptomaniac is still superior in all departments to most movies being made in 1905.