Certainly Merry Widow is filmed with great style and the opulent design is certainly diverting. Also the decision to turn the story from light opera to fairly heavy drama is completely in keeping with Von Stroheim’s own rather cynical outlook. The plot has two parts, one of them seems to spend an inordinate amount of time setting the relationship between the dashing, irreverent but humanist Prince Danilo Petrovich and the pompous, tight lipped and distinctly perverse Crown Prince Mirko. And the second one where we finally have some drama. Summing up the plot we can say that the story takes place in Monteblanco, a small central European nation. The kingdom has a king (George Fawcett), a queen (Josephine Crowell), an heir (Roy D’Arcy) and a spare (John Gilbert). The heir is Mirko, a real pill made worse by D’Arcy’s outrageous overacting. Prince Danilo falls in love with dancer Sally O’Hara. His uncle, King Nikita I of Monteblanco, forbids this marriage because she is a commoner. Thinking that she was abandoned by the prince, Sally marries the old dissolute Baron Sadohu, who was very rich and supported the entire kingdom. When he suddenly dies, Danilo seduces Sally again. 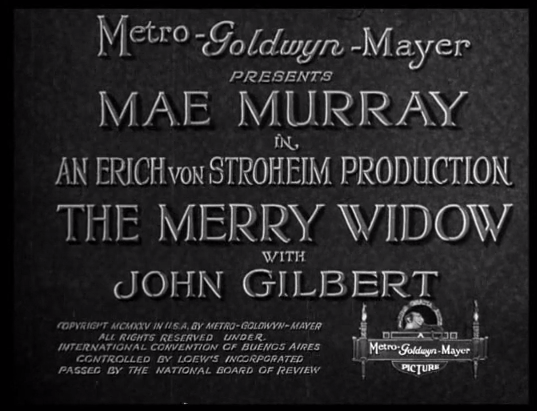 The film is based on the Franz Lehár’s operetta of the same name, and was its second film adaptation, the first being a 1918 Hungarian film directed by Michael Curtiz. I have never seen the opera, nor any other version of this story, but I feel like this has to be the definitive version, or as close as possible. The elegance of the silent film, the long run time. And two great stars of the era: John Gilbert and Mae Murray. The story is quite wonderful. There are many twists and turns. It almost feels like an epic, and the pacing creates plenty of tension and suspense. I also noticed the editing — the shooting was quite complex and the cutting very skillful. Then there’s Von Stroheim’s usual opulence with respect to decor, costume, and all the little details that evoke old-style European aristocracy.

The music of The Merry Widow was very familiar to the American public and it’s played on the organ throughout the film. Young contract players Joan Crawford and Clark Gable are extras in the ballroom scene and good luck in spotting them. Although in the Citadel film series book on The Films Of Clark Gable there is a still from The Merry Widow where Gable is pointed out.

This film gives us a lot of thoughts. The responsibility of royalty and the greed of nations come between the lovers, but they come together again, and in the dance all is resurrected. A war of wills, of mistaken feelings and misunderstanding is what they talk about while their bodies move as one.

The question of artist vs. producer is a fascinating one and highly debatable. Are producers always right? Not at all. The Merry Widow is a pearl of a silent. A pearl because it can be quite beautiful and because it was produced through an enormous amount of irritation. While some of the nudge nudge aspects had me rolling my eyes, I generally enjoyed the film and the performances. Stroheim’s take on the familiar story is filled with his customary pomp and spectacle while never losing sight of the love story at its core. It’s a lovely film, even with the feet, and John Gilbert gives a wonderful performance. Mae Murray, who could cry for her own purposes and succumb when every woman in the audience was hoping for their union, was his match.