«Stronger than Sherlock Holmes» is an Italian comedy film that has nothing at all to do with Conan Doyle’s detective despite having his name in the title. The plot is quite primitive. After reading a newspaper article about cops and robbers, a man falls asleep and dreams he is chasing an elusive criminal who can perform backflips on water and scale tall buildings. 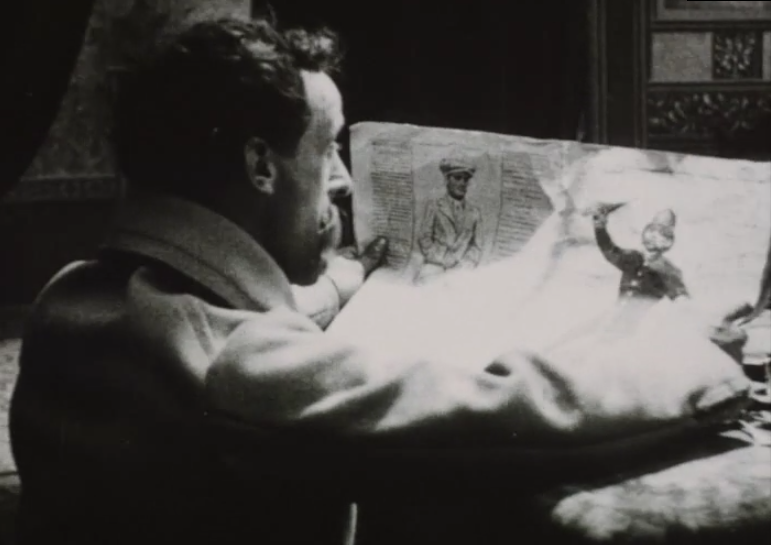 In fact, this movie is full of clever camera effects, gags, slapstick type comedy. There was nothing new in those sort of thing even in 1913, because the same things the French wizard Melier was filming a decade earlier.

The name of Holmes is only invoked to bring in the concept of crime and pursuit, the movie has nothing to do with the writings of Arthur Conan Doyle. The most remarkable thing about this movie is its director, Giovanni Pastrone, who just a year later would produce the seminal epic feature film “Cabiria.” This movie, by contrast, is a very simplistic, almost primitive example of a slapstick short that wouldn’t even stand up that well against a low-budget Keystone comedy of the same era, in terms of narrative or stunts. Still, there are some interesting indications of Pastrone’s ability here. The editing, in particular shows some sophistication, as do the camera angles. Although some scenes are shot strictly proscenium-style (the closing fight scene, for example), many are more creative.

If we talk about the plot structure, the introduction is the first scene where the man reads a paper and suddenly he falls asleep. This is the end of the introduction because after that there will be only action. So all the film consist of chasing, fighting and effects, which is not bad at all, but in fact there was nothing specific in that effects, because they were used before the movie. Everything ends when the man wakes up and punches his wife in the face accidentally.

The cut to the over-the-shoulder shot to display the illustrations is much cleverer than simply cutting to a flat image of the paper (which is what Feuillade probably would have resorted to). The robber backing into the close-up also struck me as rather modern for such an old-fashioned movie. In the context of the struggle with the animated bag, we leave and return to that scene several times, in a simplistic form of cross-cutting. Some of the effects are good too. I honestly couldn’t figure out how they did the effect of the two men scaling the building, particularly the cop who literally leaps up the side of the building, but then climbs over an (obviously real) balcony without an apparent cut. The narrative can be forgiven some of its jerkiness, given that the whole movie is a dream-sequence. It does follow a certain kind of dream-logic, as well, with magical acts permitting the impossible to happen, and what seem like minor inconveniences (like the bag) becoming insurmountable challenges. The ending, where the man gives his wife a black eye in his sleep, is a bit violent for my tastes, although not that extreme in the context of the slapstick of the period.

Summing up all of the above, this Italian trick film has almost nothing to do with Sherlock Holmes. Instead, the film is about a man who dozes off after reading the paper, then dreams himself an officer of the law pursuing a criminal. Perhaps he was reading about Holmes, and that’s the connection. Clever camera effects, gags, slapstick type comedy, and a climax worthy of Looney Tunes make this worth watching for the silent film aficionado.