The Arrival of a Train 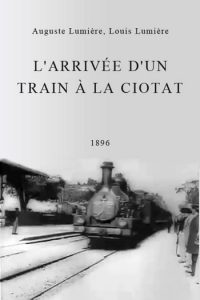 There is nothing exciting about an arriving train, but somehow it became an iconic scene in cinematic history. Produced by pioneering French filmmakers Auguste and Louis Lumière, it was the first scene that was ever shown to public. Arrival of a Train at La Ciotat was filmed in France at the end of 1895 and was shown in 1896. The 50-second long film captures the gradual approach of a train, its slow stop and the disembarking of its passengers. The arrival of a train produces little of interest in terms of actual content but it has more of interest in its historical and cultural context.

It is interesting that this scene, that is really simple and casual for us today, made a great affect on people, they said it was all realistic and it was a great power of illusion. Almost everyone heard the story about people who was watching that scene for the first time back then in 1896, they was scared and ran out. In fact, there was no real mass panic. But French scientist Henri de Parville, who attended an early screening, wrote: «One of my neighbors was so much captivated that she sprung to her feet… and waited until the car disappeared before she sat down again.» It shows us that it was a miracle alive for people back then and it is hard to imagine what they were felling during the screening of «The arrival of a train» in January, 1896.

Auguste and Louis Lumière obviously recognized the power of illusion that they had. In order to maximize the affect of the approaching train they mounted their camera as close as possible to the edge of platform, so that the audience feels as if they stand right on the locomotive’s path. People in the scene are just normal citizens that stand on the platform, so it makes us believe that all of that is real. So since we have nothing in common with the first audiences, we may understand that it was something magical for people back then.

Moreover, this scene makes a great affect today, but not as a cinematic miracle, but as a history. On a surface level we watch a train arrives but what we are really witnessing is the arrival of cinema. Nowadays we understand what cinematography is and, in fact, it is not a film in our today comprehension, but it is always interesting to see how it all started and to trace its development.

«The arrival of a train» is not just a short scene or a film, but it is a window between past and present. It is a possibility to see what people looked like, because photos and pictures are good things, but when we look at this scene we feel that we are with that people, that they are alive and we understand what they were wearing in those days, we can see their appearance.

Summing up, we can say that Auguste and Louis Lumière weren’t really artists. Their early films don’t stand up to the highly imaginative movies of George Méliès for example. But they still remain very important cinema giants. Not for the content of their films but for the fact that they kicked things off in the first place and produced the first iconic moment in cinema history. And for this reason «L’arrivée d’un train a La Ciotat» will always be remembered. Everyone who has a love of cinema should really take a minute of their time to pay attention to the first moment in an amazing thing called cinematography.