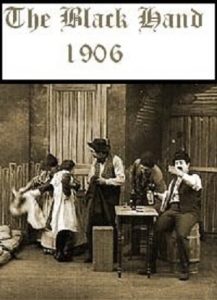 «The Black Hand» is an old film, which is just 10 minutes long, but in fact this film is iconic, because it is the first famous gangster movie that was ever made. The plot is pretty simple but supposedly it is based on a true story that was published in American press. The story unfolds in New York City, two criminals decided to blackmail a butcher and demanded a ransom of 1000$ or they will kidnap his daughter and blow up his shop. Of course the butcher does not have this sum of money and the gang kidnaps his daughter. The butcher goes to the police and they manage to arrest the kidnappers and rescue butcher’s daughter.

The film consists of a few shots, most of them with the action at quite a distance from the camera. It is interesting that the first episode in the film is shot closer, it is made to introduce characters better. Talking about structure of the plot we can notice that the story is linear, there are all usual parts of the narrative: introduction, raising action, climax, falling action and denouement.

The first scene where two criminals sit in some place and write a letter while drinking and the second one where we meet the butcher and his shop are the introduction. We see almost every character in those shots, we know what is the problem here.

Rising action happens at the end of seconde scene when the butcher receives the message from the criminals, he is chocked. The next shot shows a crowded New York City street, pedestrians throng the sidewalk, and snow is visible on the streets, then we notice that the man on the street is the one who wrote this letter. He meet Maria, daughter of the butcher, and then he just grabs her and drags her into a horse-and-carriage. And then we cut to a shot of a different street with a sigh that indicates a «Junk Shop» in front of the nearest storefront. The carriage stops and the gangsters drag Maria inside the shop. The end of the crime was the climax, after that, we return to interior stages for the rest of the film.

After all the action that happened on the street, the next things we see is Maria who is put to bed on a shoddy mattress on the floor. The the falling action begins because the butcher starts to solve his problem with a help of the police. Back at the store, we see two detectives identify themselves to Mr. Angelo, and they hide out inside of his freezer. Then one man from the gang come to take money, so he points a gun at the butcher and waits for the butcher to give him money, but suddenly, the butcher’s wife opens the door and policemen catch the bandit. After that we see the scene of culmination where the girl is saved and the gang is caught.

From a filmmaking standpoint, the movie is a fairly basic series of sequential images, but there are some interesting points. Both of the scenes that was shot outside are taken from a high angle, as if operator were standing on top of a carriage. There is no camera movement in this film because camera shots at a very wide angle, showing the entire stage all at once. Also the tension is at its highest when Mrs. Angelo is unable to open the door for the detectives, but this is undermined by the forward-facing intertitles, which have already informed us that this scene is of «A Clever Arrest: Actually as Made by the New York Detectives.»