The Battleship Potemkin is a landmark of film history that remains a gripping, moving piece of cinema.

Rumors of mutiny. Set in Russia during the 1905 uprising that foreshadowed the 1917 revolution, The Battleship Potemkin begins on board the Czarist battleship after which it is named, with the sailors whispering rumors of a mutiny. Cramped, inhuman conditions have begun to take their toll, and tempers are running high. When the ship’s doctor claims the maggot-infested meat the men are being served is perfectly edible, they have had enough. A small group of sailors refuses to eat the rancid meat, and the ship’s officers order their execution. The tension builds as an officer barks a sequence of orders to the firing squad.

Just before the triggers are pulled, a sailor (Alexander Antonov) emerges from the crowd and urges the guards to think about whose side they’re on—the officers’ or the sailors’. The guards hesitate, then lower their weapons. Mad with rage, the officer tries to grab one of their rifles, provoking a ship-wide revolt in which Antonov is killed.
Martyr’s inspiration. The Potemkin then steams to the town of Odessa, where the sailors erect a makeshift shrine to their fallen comrade. Antonov’s martyrdom inspires the workers of Odessa to unite with the men of the Potemkin and rise against the Czar. 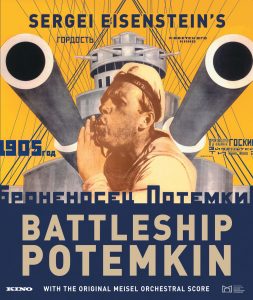 Czarists battle rebels. One bright day when the people of the town are on the shore, waving and cheering the men on the Potemkin, Czarist troops arrive to quell the rebellion. Ranks of soldiers advance down the stone steps that lead to the beach, firing at everything that moves. A young mother is shot, and her baby carriage tumbles down the steps. An old woman tries to save the child but is killed by a Cossack. The outraged sailors of the Potemkin turn their ship’s huge guns on Odessa’s military headquarters and destroy it. When the smoke clears, corpses lie strewn on the Odessa steps.

Fleet unites. Back on the Potemkin, the sailors surmise that the rest of the Czar’s fleet will be coming to quell this uprising and decide to leave Odessa and meet the flotilla head on. When they encounter the fleet, they are met with smiles, their fellow sailors having decided to join the struggle against the Czar.

Film celebrates Revolution. Sergei Eisenstein was twenty-seven and had recently completed the film Strike (1924) when he was commissioned in March of 1925 to produce a film celebrating the twentieth anniversary of the 1905 Revolution. Along with political activist Nina Agadzhanova-Shutko, he drafted a script hundreds of pages in length, which attempted to cover all the important events of that year.
Filming began in Leningrad but was disrupted by bad weather. Then, after shooting a few scenes in Baku, Eisenstein moved on to Odessa, where the decision was made to devote the entire film to the events that occurred in that region, using the Potemkin mutiny as a microcosm for the whole revolution.

Montage editing. The result was one of the most important films ever made, a triumphant vindication of Eisenstein’s “montage” theory of editing. The director constructed Potemkin almost along the lines of a musical work, cutting disparate images together with a rhythmic logic and intensity that created a new kind of visual—and psychological—truth.
Eisenstein’s imitators. One testament to the brilliance with which Eisenstein put his montage theory into practice is the number of times that his work has been imitated. Filmmakers ranging from Alfred Hitchcock and Sam Peckinpah to low-budget mavericks like Russ Meyer and George Romero have drawn on Eisenstein’s work to fashion their own—widely differing—cinematic styles. The Odessa steps scene, in particular, has become the single most famous sequence in film history, affectionately parodied in both Woody Allen’s Bananas (1971) and Terry Gilliam’s Brazil (1985).