“A Picture With A Smile And Perhaps A Tear” read the opening title, but The Kid is much more than this sentimental opening implies. With this film, the first feature length work he wrote and directed, Charles Chaplin more fully realized the intimations of pathos he had injected into such shorts as Easy Street (1917) and The Immigrant (1917) without sacrificing a bit of humor.

An abandoned child. The story opens with an unwed mother (Edna Purviance) leaving the hospital with her newborn son. She passes the wedding of a young and clearly unhappy bride to an older, well-off man. A flower falls from the bride’s bouquet and the groom, unknowingly, crushes it with his foot. Purviance realizes she can’t give her child the care he needs, so she pins a note to him and places the infant in the back seat of a fancy car (in actuality the automobile used had been loaned to Chaplin by its owner, D. W. Griffith). 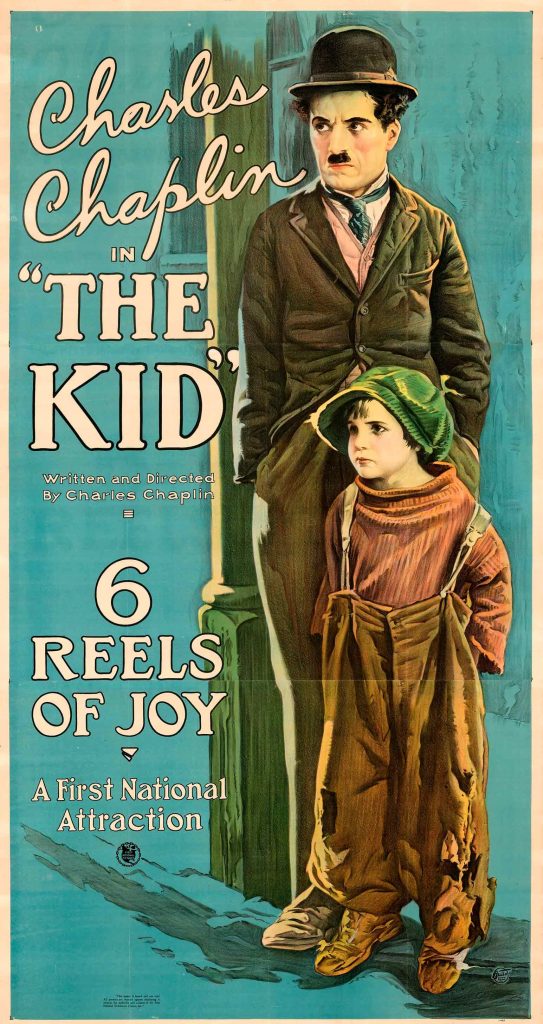 A new home. A pair of thieves grab the car but soon discover the unwanted cargo. Rather than risk kidnapping charges, they stop the auto in nearby slums and leave the baby in a back alley. Along comes Chaplin out on a stroll, who finds the baby. At first he tries to place it in another baby carriage, but after staving off blows from a lady (Edith Wilson) Chaplin takes back the baby. He raises the eyebrows of a cop in his efforts to rid himself of the child but then finds the note and decides to raise the boy himself.

Meanwhile, Purviance has had a change of heart but is shocked when she discovers the automobile stolen. Chaplin sets up his simple flat as a nursery, improvising a baby bottle with a coffee pot and nipple, while cutting out diapers from a sheet.
Family threatened. Five years pass, and the child (Jackie Coogan) has become a thriving partner in Chaplin’s window repairing business. Coogan throws rocks through someone’s window and Chaplin knocks on the door offering to repair the broken pane.

In the meanwhile Purviance has become a well-known singer. She does volunteer work in the slums and one day meets Coogan, not realizing the youngster is her own child. After the boy gets into a fight, Purviance urges Chaplin, believing him to be Coogan’s father, to have a doctor take a look at the child. The doctor, a complete incompetent, learns that Chaplin found the child in the streets and arranges for the proper authorities to take the boy away. As a tearful Coogan is driven away in a truck Chaplin gives a rooftop pursuit and catches up with the vehicle. They are reunited in an emotional embrace and seek refuge.

Meanwhile, the doctor shows Purviance a note Chaplin gave him and the singer recognizes it as the note she had written five years ago. She puts an ad in the paper offering a reward for Coogan’s return. Chaplin and Coogan attempt to hide out in a flophouse, but since the Tramp can only afford to pay for one of them, he sneaks Coogan in. The proprietor recognizes Coogan’s description from the paper and takes the boy while Chaplin is sleeping.

Reunion. In the morning Chaplin is heartsick to find Coogan missing and begins a vain search for the boy. Worn out from his efforts, Chaplin falls asleep in a doorway and dreams of life in Heaven. He finds himself rudely awakened by a cop, but instead of arrest he is taken to Purviance’s home. The boy leaps into the Tramp’s arms and together they go into the house.

A daring experiment. The Kid is not just a beautifully told dramatic comedy, it is a daring experiment in structure by Chaplin that succeeds on every level. Unlike his slapstick shorts, which emphasized slapstick for laughs, Chaplin here builds the humor on smaller moments of character and situation. What’s more, each moment of comedy, such as Chaplin’s attempts to get rid of the unwanted infant and the flophouse confrontations between Chaplin and a pickpocket, are funny bits built on genuinely serious premises.

This film proved to be a turning point in Chaplin’s work that pointed him towards a continual exploration of the serious and the funny within his feature films. Though other short comedies followed, The Kid clearly established Chaplin with both the public and filmmaking community as an artist who understood the delicate balance between comedy and drama.

Fast friends. The Kid was a resounding success for Chaplin and made Coogan the biggest child star of the 1920s. The chemistry between Chaplin and Coogan is genuine on screen because it was merely an extension of their off-screen relationship.
Chaplin had just completed Sunnyside (1919), a two-reel comedy, and had gone into a depression following the death of his newborn son who had suffered from severe birth defects. He had been working on a comedy tentatively titled Charlie’s Picnic when he took in an evening of vaudeville. Watching Jack Coogan, a comic dancer performing with his little boy, Chaplin was immediately taken with the son, Jackie. He saw enormous potential for this bright, talented boy and without signing him began planning a film around the child. Chaplin’s hopes were nearly dashed when he learned that Roscoe “Fatty” Arbuckle had signed Jack Coogan but he was relieved to learn it was the father the rotund comedian had put under contract. Once filming began, Chaplin was amazed at Coogan’s abilities. For their emotional separation scene, Coogan’s father attempted to induce tears in his son by threatening to send him off to a workhouse. A concerned Chaplin took Coogan aside after the shooting was over to assure the boy this would never happen, but through his tears the youngster surprised his older friend with a seasoned reply, “I knew Daddy was fooling.”

The man and boy became fast friends with a mutual respect that would last throughout their lives. In fact, years later, Chaplin returned to America after his exile in Switzerland, and the two were reunited after a fifty-year separation. Coogan, who then was best known as “Uncle Fester” on television’s “The Addams Family,” met with Chaplin in a tearful real-life reunion, and Chaplin took Coogan’s wife aside and told her “You must never forget. Your husband is a genius.”

The dream sequence. The film’s dream sequence remains one of the most charming moments Chaplin ever devised. Chaplin’s vision of Heaven is not grandiose but a simple picture of a happier life for the poor man. The director showed a clear understanding of his character and his world, never straying beyond the hopes and needs of the Tramp.
In the dream, slum is transformed into a clean, happy place with the film’s principals—including the local bully and Chaplin’s nemesis, the cop—appearing as winged angels. Man and boy are reunited with all seemingly blissful until the Devil (played by Coogan’s father) comes to upset things. He tempts Chaplin with a girl (Lita Grey), which raises the bully’s ire since she’s his girlfriend. The bully shoots Chaplin, and Coogan, crying over his friend’s body, tries to shake the Tramp awake. The scene dissolves into reality with the cop shaking the sleeping Chaplin from his slumber.

Lita Grey was only twelve years old when she appeared as the flirtatious angel who causes Chaplin’s troubles in the dream sequence. Chaplin had been captivated by the girl’s looks after being introduced to her by an assistant who was a neighbor of McMurray’s mother. Four years later, under the name Lita Grey, this girl became Chaplin’s second wife in what would prove to be a bitter union for both. Grey claimed to be the inspiration for the Heaven sequence, though that point is debatable.

Final production. Getting The Kid edited proved to be quite a task. Chaplin’s business associates at First National sided with his wife, Mildred Harris, in an ongoing divorce suit. Among Chaplin’s assets the company wanted to control in this suit were included the film’s negative. With the collaboration of his creative associates, Chaplin snuck the negative (some 400,000 feet in 12 crates) out of California to Salt Lake City. A cutting room was set up in Chaplin’s hotel room despite the fire hazard the nitrate film posed. After a test showing, the film was taken to an empty New Jersey studio and under the guise “Blue Moon Film Company” the final editing took place.