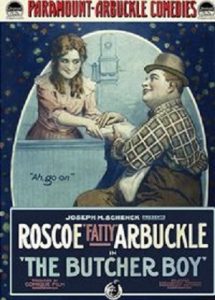 The butcher boy is the film where we see Roscoe ‘Fatty’ Arbuckle for the first time. It was the first role in his career. In fact, the plot is not that important here, because it is more interesting to watch all the actors in the movie play. But if we talk about summary of the plot, then it is pretty simple. In the first half, Fatty and Alum are employees at a store and rivals for Almondine’s affection. After a heavy food fight, she is sent to a girls boarding school by her father, the shop owner. In the second half of the movie, both Fatty and Alum enter the school in drag, and the fight for Almondine continues. In the end, Fatty runs away from that school with his love, Almondine.

There are a lot of interesting gags like food fights and pratfalls, also there are a lot of gags that I really liked, for instance, the way they make a dog run the a coffee mill or the moment where Miss Teachem, the head of the school, spanks Fatty, and he spanks her back.

Buster Keaton, who was a customer at the store and supported Alum in the second half, is also very funny in this movie. He played really well there, and I like his acrobatics. The scenes with him made me laugh a lot.

If we talk about the plot of the film, we can say that there are several parts that can be clearly seen, There are introduction, the first half in the shop, the second part in the girls school and the ending of the movie.

Every character introduced by the title, then, we see everyone working in the shop. We see that Fatty is the butcher boy, and there is an interesting shot where we watch him working, this scene is very funny, in my opinion. Then we see the process of selling goods in this shop, it is also made with a lot of humor.

All the action begins when Fatty is asked to replace the cashier. There is a scene of fight between Fatty and customer, as a result, we see mayhem which includes small bags of flour being hurled and exploding, pies are being tossed, and brooms are being wildly swung amid the thick clouds of flour lingering in the air. So the girl is sent to the boarding school.

Then the second part starts and all the action is moved from the shop to the school. Fatty who is determined to marry Almondine disguises himself as a female cousin and follows her to the all-girls boarding school, but Alum has the same idea. So the action and the fight continue there. In the end everything ends with standard happy ending where Fatty and his manage to get out of the school and run away.

In conclusion I can say that «The Butcher Boy» is one of the most historically important film among all silent comedy shorts. Moreover it is the first release from Roscoe Arbuckle’s very own studio. It is the first glimpse of Buster Keaton on the big screen, which of course has inspired no end of fan joy and excited analysis. But despite all that facts, still this film is just a darn excellent short. «The Butcher Boy» has that two-part structure that’s usually assumed to be a weak point, but it’s used perfectly here. Simply said, it is a great performance, because all the actors there play really well, and the story is simple but it is full of small funny details.