«A Christmas carol» is a film based on a story of Charles Dickens. The plot is almost iconic. The story of “A Christmas Carol” is very well known, and while short, this early version remains faithful to the most important parts of the plot. The day before the Christmas holidays, Ebenezer Scrooge refuses to contribute to the Charity Relief Committee, and then rudely rejects his nephew when he visits Scrooge in his office. When Scrooge returns home, he sees the ghost of his former business partner Marley, who warns him of the punishment he will suffer in the next life if he does not change his lifestyle. That night, Scrooge is visited by three more spirits who show him his past, present, and future that awaits him. 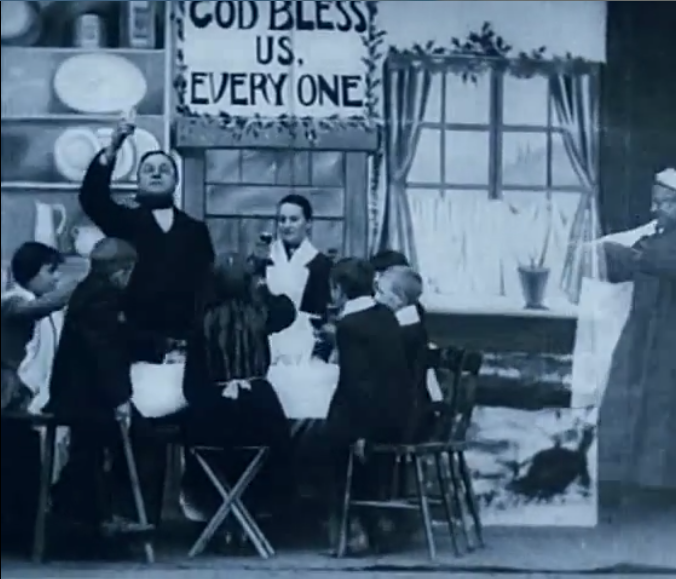 Obviously this version of «A Christmas Carol» is largely noteworthy for its historical value since it doesn’t have time to delve very deeply into the Dickens story. This one-reel wonder is watchable as long as you have a fondness for silent movies like I do. I’m not so sure others will consider it worth a look. The story is so well-known and so worthwhile that almost any version of “A Christmas Carol” is worth seeing. This one is a good movie adaptation for its era, and it would have been hard to improve upon it significantly given the techniques and resources available at the time.

For 1910, the special effects are pretty good with the ghost “visions” coming across quite well. McDermott does a very good job in his role even though he can never really dive into it due to the film not really lasting long enough to get to the more adult or scary parts of the story. Charles Ogle plays Bob Cratchit, which was fun seeing as the same year he’d also play the monster in Frankenstein.

The cooperative work between Dawley, Miller and Kent is truly excellent in this film and make it stand out among the many early films by the Edison Manufacturing Company. Kent’s experience in Vitagraph’s versions of literature classics adds a lot of class to the movie and gets excellent performances from the actors. This style works perfectly well with Dawley’s directing style, who makes the film look a bit less stagy than the usual Vitagraph movie by making interesting visual compositions and giving good use to the limited camera-work of the time. In any version of “A Christmas Carol”, the role of Scrooge is often one that can make or break the adaptation due to its enormous importance, and in this version Marc McDermott doesn’t disappoint. Marc McDermott, one of the Edison Studio’s best actors, plays Scrooge. He does a good job, although the techniques of the era limit him somewhat, since the story relies on an effective Scrooge to make an impact. The story moves quite quickly, which again is simply a reflection of the time. Quite a few one-reel features of the era squeezed in enough material to fill two or three times their running time.

Judging the film by today’s standards, the 1910 version of “A Christmas Carol” (or any other film from those years) could be seen as a stagy, uneven and incomplete attempt to adapt a classic story; however, set in the context of its time, it is actually one of the best silent movies of those early years of cinema. While not exactly the most innovative film of its time. this early version of Dickens’ classic is a very good example of early film-making and a good choice to watch in Christmas.