The story is very simple. A policeman spots a fire in a home, so he tries the windows, but they are locked. He runs to the nearest fire station. The firemen call for help, and then a cart with a ladder arrives; they are harnessing a horse to it. A second horse-drawn truck joins the first, and they head down the street toward the fire. A man is sleeping inside, and he wakes up in the midst of the flames and throws himself back on the bed. A fireman enters, hosing down the flames. He carries the victim down the stairs to safety. Other firefighters enter the house to save things, and come out alone with a child. The saved one rejoices, but this is not the end. Another resident appears at the top and he jumps. 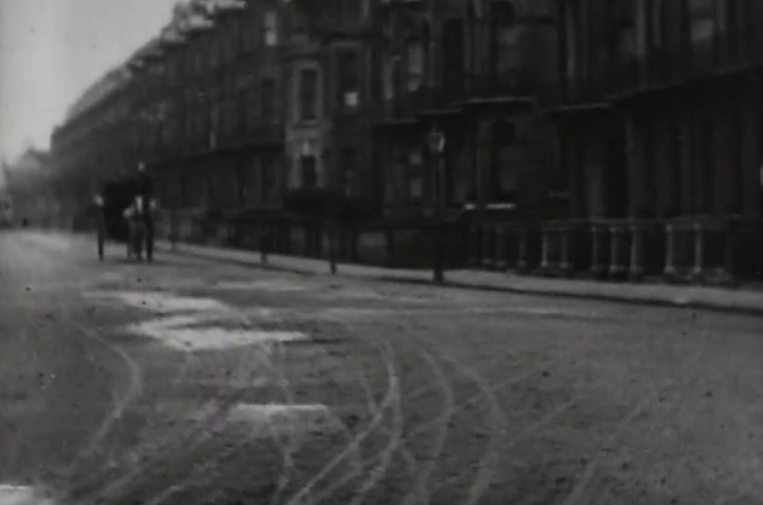 The film uses 5 scenes to tell it: the first scene is when the cop discovers the burning building, the second the firemen leave to go to the rescue, the third a shot of the racing firemen, the fourth scene is the rescue of the man, and the continuation of the events continue in the last scene, a shot of the outside of the house. Each of the sequences begins with a life-threatening situation: can the policeman get into the house and help the occupants? Can the fire brigade get the equipment on the street? Can they get to the house in time? And so forth.

We should note that firemen rescue scenes were very popular in cinema’s first years. The activities of fireman and their putting out fires was a common subject in early actuality films and early staged, or fiction, films, dating back to “Fire Rescue Scene” (1894) being filmed in the “Black Maria”. “Fire!” is a five-shot fiction film. Filmmakers really must’ve found firemen to be an exciting subject for early dramas. While the story really isn’t involved enough, for 1901 it was exceptional and the film is one that would actually be interesting to see today.

While the basic idea was fairly simple, the film-makers were resourceful in including shots of several aspects of the situation. It’s worth paying attention to the details, both in the reactions of the persons in the house, and in the settings. Not least among the interesting aspects of this movie is the chance to have a detailed look at the fire-fighting equipment of the era.

A lot of action is packed into a few minutes, and while the way that it is pieced together may be just a bit rough in places, the editing is very commendable for a time when there was little experience to go by. All in all, this is among the better-made narratives of its time.

For an early film, this one is actually pretty good. In this silent movie, the crew re-creates a fire and shows the firemen doing their job–starting with leaving the firehouse all the way through rescuing all the victims. It’s sort of like a documentary of their job that is done by re-staging what looks an awful lot like a real fire. Unlike some similar films, this one looks authentic enough that it both entertains and gives us insight into the profession in 1901. This was probably a rather exciting action film for its time. The onrush shot of the horse-drawn fire carriages, however, is rather unexciting by the camera being placed in front of the action from a far distance–allowing the action to (slowly) come to the camera.