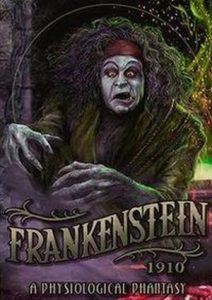 «Frankenstein» is the film based on Mary Shelley’s classic novel. Produced by Thomas Edison’s very own studio, J. Searle Dawley’s «Frankenstein» has been widely considered the first American horror film. The plot of the movie is quite iconic. In the beginning the young Frankenstein says goodbye to his parents and goes away to college. After two years of experiments he discovers the mystery of life, so he writes a letter to Elizabeth, his love, explaining that this night he is going to create the perfect human being. Then Frankenstein starts to create his human being, and, when it is done, the monster exits the creation room. But this creation is far from perfect, so Frankenstein is horrified by how evil his monster is. Frankenstein goes away, but the monster stalkers him, so Frankenstein collapses on the floor. He is revived by a friend and then returns home. But the monster follows him and come into his house. Then, as the love between Frankenstein and his new wife get stronger, the monster disappears.

This movie is shot in the non-moving camera fashion typical of early 1900s films, giving us the impression of a stage play. There is a lot of interesting details such as a brown tint that is used in many of the laboratory scenes, whereas in the later part of the film blue print is used because horrific happenings begin to occur. Also it is interesting to notice the appearance of the monster with its hunched back, long fingernails, distorted face also became iconic for early horror cinema.

Shelley’s themes included not man as monster, but man as God, in addition to the questions such as «How dangerous can man’s quest become for what he so single-mindedly desires?» Or «Once man discovers the mystery of bringing life to the dead, is there any further spiritual frontier for a human being to explore?», due in part to its short running time, did not appear in Edison’s work. But still we must understand that it is the film adaptation, and its goal was to be scary and frightening for audience.

If we talk about the plot structure then it is standard linear story with introduction, raising and falling action and denouement. That is pretty simple, because, in fact, I have already mentioned that all the techniques of filming seem to be the theatrical.

There is an introduction in the first two shots where we can meet the main character, Frankenstein, and his family. Then in the next episodes we see that he discovered the secret of life and death, so he writes a letter about it to his love.

Then we see how the action starts to raise. We see the process of creating his perfect human being, and it is showed with a lot of suspense, because it is interesting to watch how it becomes a human, so we understand that all the action starts there. After that we see the monster frightens Frankenstein and he runs away.

When Frankenstein comes back home the action begins to fall, and the main problem of the film starts being solved, because we see that there is a fight between Frankenstein and his monster, and it is needed to be solved. It ends with disappearing of the monster and the victory of love.

Summing up, we can say that «Frankenstein» is an iconic film that has a lot of features which will be used in a lot of films later. For instance, the appearance of the evil creature became standard at some for a lot of horror film.